When starting to learn about Bots in the Microsoft ecosystem, you'll likely land, as I did, on Microsoft's How bots work article. I'm sure that, unlike me, you figured out some of the important subtleties in this article and particularly in the state diagram near the top: 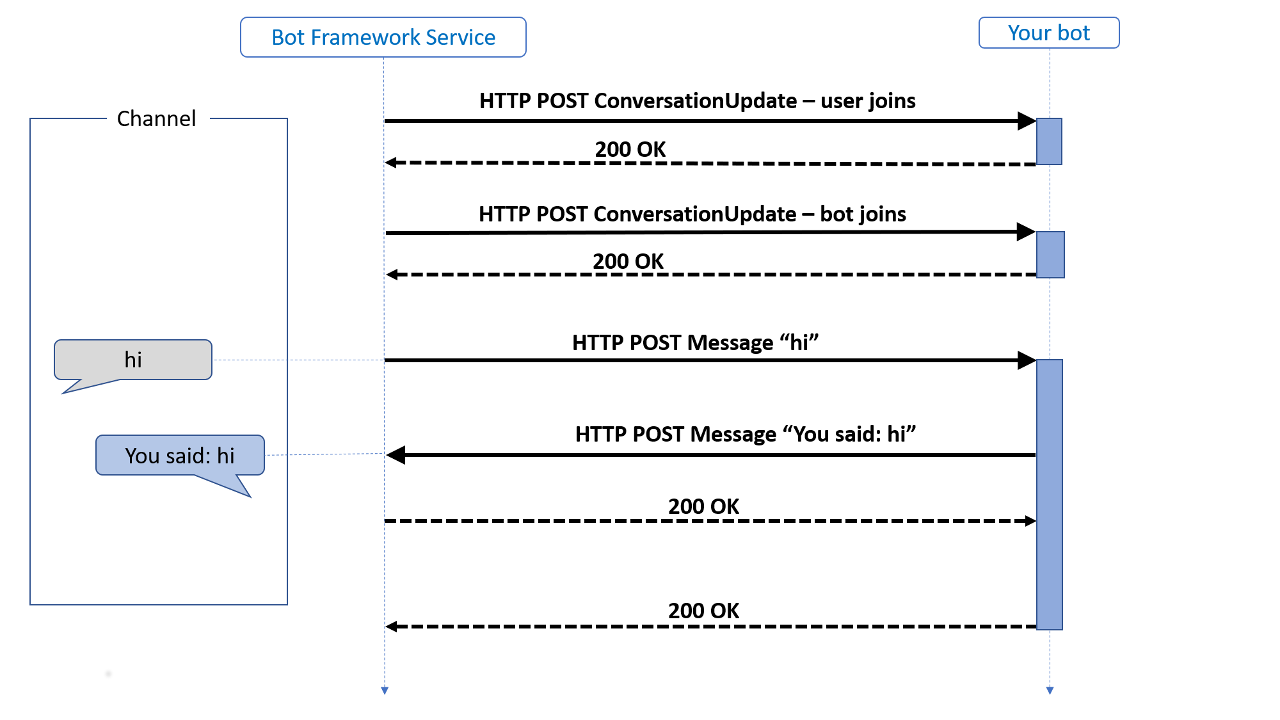 However, unlike you, it took me a while to figure out some key messages in the article, especially as they relate to how Bots actually communicate, which is what we'll discuss in this post.

Now, truth be told, if your Bot is fully working, then how a Bot works might seem irrelevant. However, there are several reasons why it's useful to know how the things we rely on work under the covers. First of all, it's always useful in troubleshooting to know what's going on behind the scenes. In addition, in the case of Teams Bots, understanding how they work will help with some important use cases such as getting the members of a channel or sending a message to a user outside of a regular message-response cycle.

As an example, the ChitChattr Reminder and Quotatious Bots need to send messages on specific schedules rather than in direct response to a user's incoming message. This pattern is referred to in the world of Teams as "Pro-active Messaging" (more info here) and it is clearly a topic a lot of people are having issues with (here are two separate examples just last week), so hopefully I'll be able to cover more about it in future posts. For now, let's return to the trying to understand the original topic.

As I mentioned above, if you're like me you might have glossed over the original image How bots work article and instead of the seeing the actual state diagram above, you might have imagined you saw something like this (I'm ignoring the ConversationUpdate part, and just talking about the message sending):

Now, interestingly enough there is a user case that works like this in Teams, which is for Task Invoke. However, for the most part, the interaction above is totally wrong for two main reasons:

I imagine partly it's in order to enable all of these scenarios that the mechanism needs to be, effectively, asynchronous in nature, because, at this stage, your Bot will send it's own HTTP POST message to a specified endpoint in order to send one or more responses. Each of these responses, while they appear to the user to be part of the same chat conversation, are actually totally unique HTTP POST requests, and each will get it's own 200 responses.

This Service Url is telling the Bot what endpoint to call if / when it intends on sending a response message to the user.

So, with everything we've learned above, let's put together a new diagram that (hopefully) better illustrates the flows between all the parties involved. Note that I'm not using a proper State diagram but something that I hope is more simple and understandable, and I'm not showing the 200-code responses, only the important flows.

The numbering indicates (roughly) the flow of messages in the exchange, so let step through them and see what's involved:

Teams gets the "Messaging endpoint" for your Bot from the Bot Framework Services, as shown in the sample screenshot below.

This call is deserialized via the Bot Framework libraries, in the case of a C# Bot, for example, into an Activity object, from which you can read the Text property, as shown:

Behind the scenes, you're calling into the Bot Framework libraries, which is using an HttpClient internally to make the HTTP POST call to the calling application's Service Url. This is shown below in the code from the Conversation class in the BotBuilder DotNet Project. I've highlighted below where the POST HttpRequestMessage is created, and how it's sent to the internal HttpClient.

All of this, of course, is transparent to the user - they just see it as "I sent a message to the Bot, and (hopefully) got a response", as shown below in the screenshot from Teams:

Now, in this example, I sent a garbage message to my Bot in the form of "boo" (or "Foo" in one of the screenshot samples above). The Bot in question uses LUIS to try understand the incoming message, so my Bot, BEFORE sending the user's response message, makes a call to the LUIS API. In this example, it can't understand what "boo" means, so it returns a standard error message "Sorry, it looks like something went wrong". A summary of this conversation, showing the user's Chrome browser instance call on my desktop, the Bot's call to LUIS, from the Bot running locally on my development workstation, and the Bot's call back to Teams, appears in the Fiddler trace below. Note the "Process" column, indicating which application is making which call.

Well, that was quite a long post, especially for my first blog post in close to a decade! I hope it was useful in understanding some of what's going on behind the scenes with how Bots work, with a particular reference to Microsoft Teams.

[Update 2020-01-19] Following an interesting discussion on Stack Overflow, I thought it might be useful to add here that it's not required to use the hosted Microsoft Bot Framework Services in this mix - one can build and run a bot using the Microsoft Bot Framework that's entirely self hosted, for example on premises, if that suits your needs. My thinking at the moment though is that it's better to leverage the Bot Framework Services as they handle things like security and provide an easy jump if you want to make your bot work with 3rd party platforms (e.g. Teams, Facebook). For more on this topic, see the post here by Michael Richardson.

I'm a geek, a dad, a software professional for 20+ years, and 11-times Microsoft MVP with a passion for technology and continuous learning